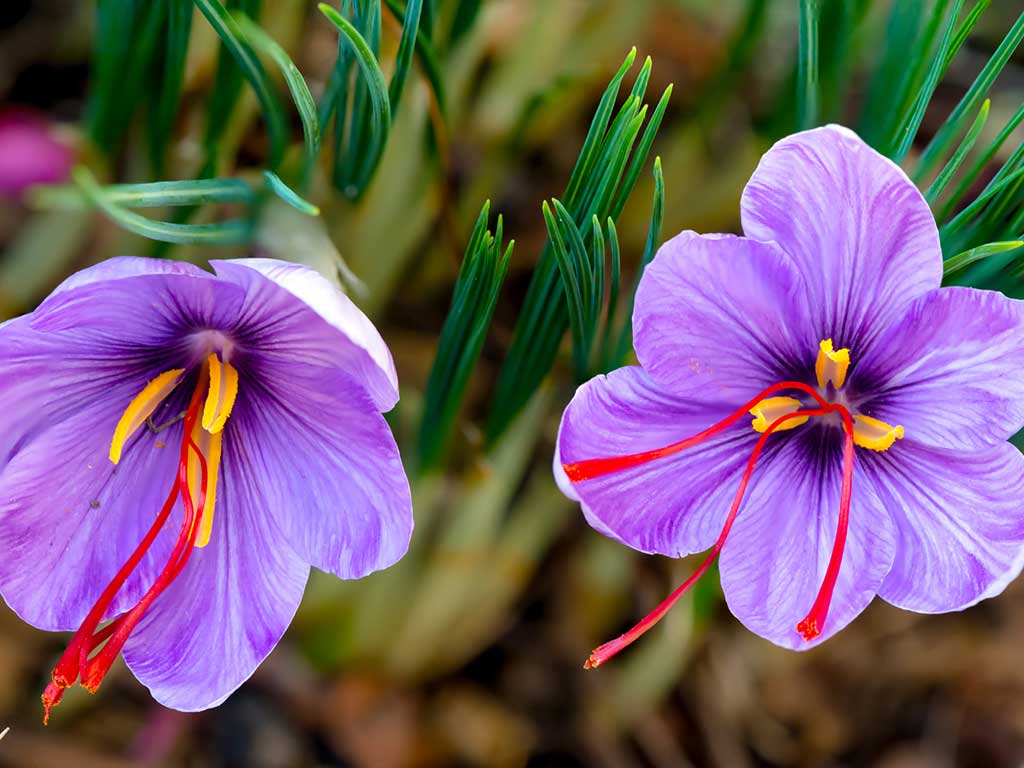 Saffron, this exquisite Iranian souvenir and the most expensive spice in the world, is nothing but part of the pistil of a stunningly beautiful flower named Crocus Sativus, or Saffron Crocus. As a curious tourist, who loves tasting and smelling pure and authentic Iranian saffron, you might be prone to be duped by the greedy sellers. That’s why you should know what saffron is and be able to distinguish the quality.

Scientifically, pistil consists of four parts: stigma, style, ovary and ovule, named from top to bottom. Iranian farmers name the stigma and the top of the style as “Negin”. Literally it means “gem” and that’s well named because this deep red jewel is the most precious part of the flower. When harvested, workers pick each flower, take the pistil out — the ovule and ovary stays in the flower and just the thread like part, including the style and stigma, comes out. Then, they separate “Negin”. What remains — the lowest part of the style that is pale yellow or white — is called “Risheh”; which means “root”. Keep this due explanation in mind as in the following passages we’re going to use them repeatedly.

Negin is what you should buy, not Risheh. Negin looks like a small trumpet whose length is about one or one and a half centimeters. If you make a sectional cut, you’d see that the section is prismatic. Contrarily, Risheh has a tube-like section and is thin. Now you have the first proof of visual inspection.

You think with yourself “OK, I got it. That’s quite straightforward and I can easily distinguish the deep-red trumpet-shaped Negin from the pale yellow rope-like Risheh.” But, unfortunately, that’s not as easy as it sounds. To have the best quality, color and taste intensity, the saffron flower must be harvested early morning, before dawn. Unless, the red color of Negin travels to Risheh, making this worthless part of the pistil red. This process doesn’t make saffron out of Risheh — either way, Risheh lacks taste and color intensity to flavor any food. Regrettably, such phenomenon just decreases the quality of Negin and final product would never be top-notch.

In addition, high demand for the pricey saffron emboldens the unscrupulous businessmen to constantly make new deceits. They dye the Risheh and make it dark red. They even color corn silk, mix it with some real saffron and sell it. They can offer lower prices then, making their product alluring. We will later categorize the prevalent frauds. Nonetheless, you should train your eyes, enabling yourself to visually check the quality.

Not only the first, the visual inspection is probably your only option at many shops. You ask the seller and they bring you several beautiful packages of saffron in different brands. The salesman starts explaining you the differences and finally convinces you into buying what benefits him the most. The packages are intact and you won’t be allowed to open them until you pay the price. That’s exactly when VISUAL INSPECTION matters. The question is what you should inspect?

Inspecting the color, with all the explained complications, is really tricky and you won’t master it out. I firmly advise you to forgo color test. Forget it. You’d be deceived.

This is what I want you master. Remember that Negin is thick, trumpet-like and has a prismatic section while Risheh is thin with a circular section. Carefully look through the package of saffron and count Negin(s) and Risheh(s). In the market, even the well-known brands, sell a combination of Negin(s) and dyed Risheh(s) to increase profit and competitiveness. Try to make a ratio of Negin to Risheh. The higher the ratio, the purer and better the saffron.

I’ve talked to many saffron experts and even farmers, there’s a way the experts always prefer: TASTING. Saffron is extremely bitter. If harvested at the right time — as said before, for the best quality the flowers must be picked before sunrise — all the essence remains in Negin, making the bitterness extreme. Trained adept tongue of an expert easily distinguishes this bitter taste. Although this check is faultless, it is very difficult to master. One would need tasting various products and train their tongue.

Like gold, saffron products have purity degree. The Negin percentage of the whole package identifies the purity. The higher the percentage, the purer the mix — clearly maximum purity would be %100. Brewing saffron — I will introduce you best brewing methods later — extracts its essence which is used in cooking. One popular use of the extract is to color cooked rice — in Iran, we call cooked rice, “polo”, quite similar to the word pilaf. The purer saffron, the less amount of the essence one would need to color a certain amount of “polo”.

Downside of this test, is that you should first buy the product, bring it to home, brew and use it. Thus, it’s only reasonable when you want to buy wholesale.

QUITE IMPOSSIBLE TO KNOW: Age

Akin to other spices, saffron loses quality, taste and color with time. Therefore, newly produced saffron excels in quality. I understand you would expect me teach you something to recognize the age. Unfortunately, though, it’s almost impossible. The color, taste and smell of fresh saffron differs from the old one, yet it’s impossible to teach the difference. I would only mention a possibility: in the aged saffron, if not very well packaged, Negin(s) would have already broken into smaller pieces. The package, therefore, would contain more powdered/ ground saffron.

Before brewing, no matter with which method, you should finely grind the saffron. Traditional mortar is the best device for this purpose. Put a full teaspoon of saffron into the mortar, add half of a teaspoon sugar — sugar makes grinding easier — and grind. Better to prepare a little ground saffron each time, as it loses quality faster.

Traditionally, this is how Iranians have been making saffron extract. Put the ground saffron in a small cup and pour a little boiling hot water onto it. Now let it rest for a while in a warm place. Many Iranian chefs still put the cup into the rice pot when the rice is passing the final cooking stage. You can equivalently put the cup beside a heater or a kettle of boiling water. Please avoid putting the mixture directly on fire. In a few minutes, the saffron extract is ready.

This method is rather new. You put a cube of ice over the desired amount of ground saffron and let it rest. It’s lengthier than the previous method but results in an extract with better color.

You might even expedite the procedure if you first add the boiling water to the saffron powder then drop a cube of ice in the cup. The shock results in a beautiful color while the hot water guarantees quickness.

No.1) Packaging a combination of Negin and colored Risheh — as mentioned, Risheh might be naturally or artificially dyed. This is what all the brands do, more or less.

No.2) Adding dyed corn silk. The more corn silk, the lower the quality.

No.3) Covering the saffron threads with a thin layer of oil, salt or sugar. The added substance increases the weight and makes more money for the seller.

If you have any questions, please make a comment. I will answer all the questions with pleasure.
By Kami from Iran Cozy Hostel
10/24/2020