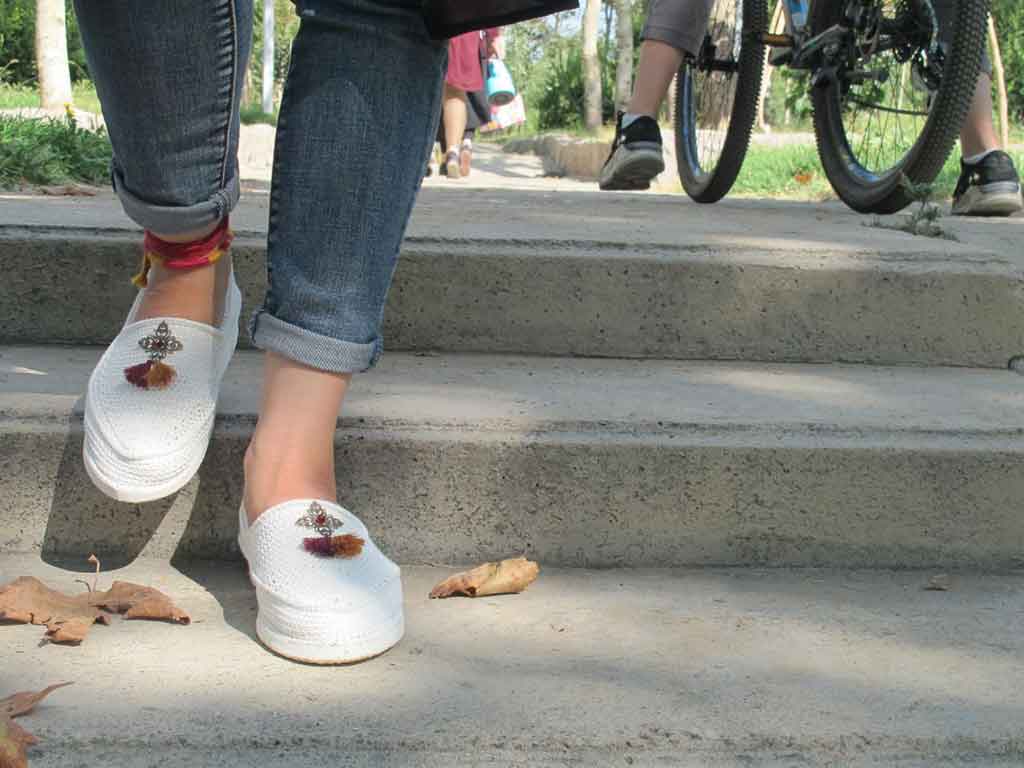 As a popular footwear, Giveh has a long story woven into the history of Iran. Persians, especially villagers and nomads who live in mountainous areas, used to wear it mainly because of its reliability.

In our research, we couldn’t find any solid evidence showing the origin of Giveh; neither the place, nor the exact time of its birth is clear. Nonetheless, some historians refer to Shahname — the masterpiece poetry book by Ferdowsi — and say that one famous character of this book, Giv, used a type of footwear in his voyage in Turkestan.

Depending on the place of origin, artisans would make Giveh of different materials and even with different techniques. Nowadays, many people follow fashion. Yet, this traditional handicraft with its genuine beauty and sturdy durability have kept its position among the popular shoes.

Recently the business of Giveh is reviving and more people are showing interest in it. A history of 1000 years lies behind Giveh, which clearly proves that this durable, attractive and comfortable piece of art is going to live with us in the future. 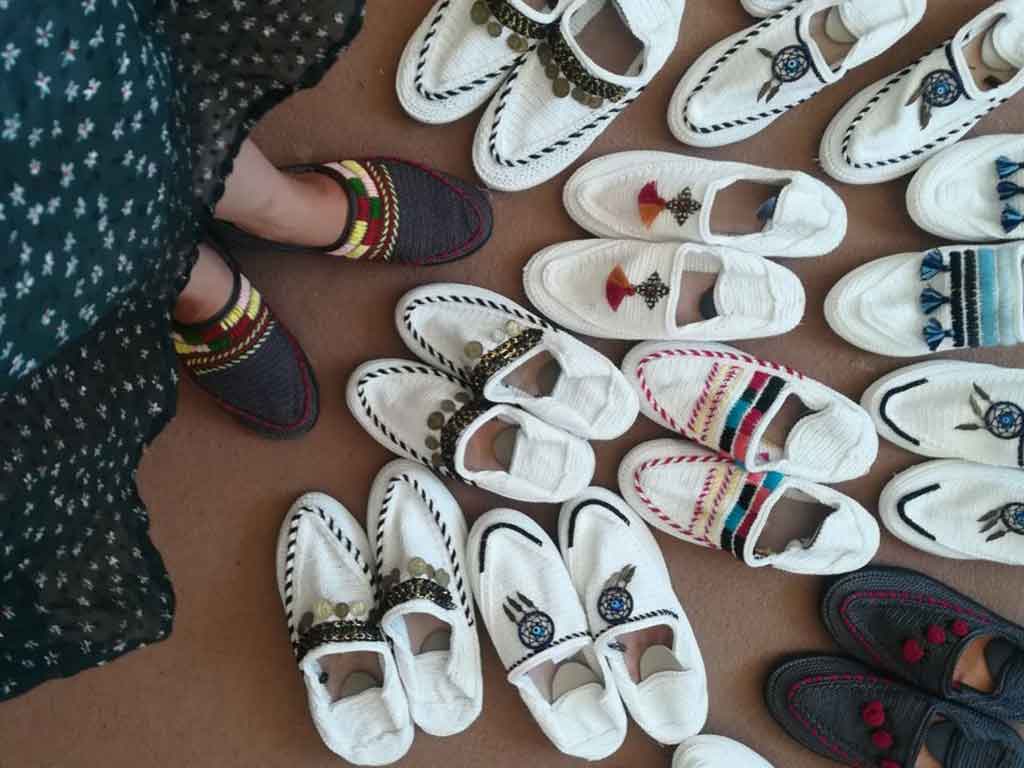 Without laces, Giveh consists of the sole (Zireh) and the upper part (Ruyeh). Two small pieces of leather are usually used in the back and front of Zireh to make it stronger.

Ruyeh is woven of cotton, wool or silk thread. Zireh can be made of different materials: 1- Fabrics made of cotton cords; the older the fabric, the better the Zireh. Giveh with this type of Zireh is called “Shiveh” which is mainly produced in Abadeh (A town of Fars province). This Zireh has high quality. 2- Leather that has lower quality compared with fabric. 3- Rubber: With the advent of rubber industry, inexpensive raw material for shoemaking became available and people with less income turned into using Giveh with a rubber Zireh. Although that has the lowest quality, boasts longest lifespan. 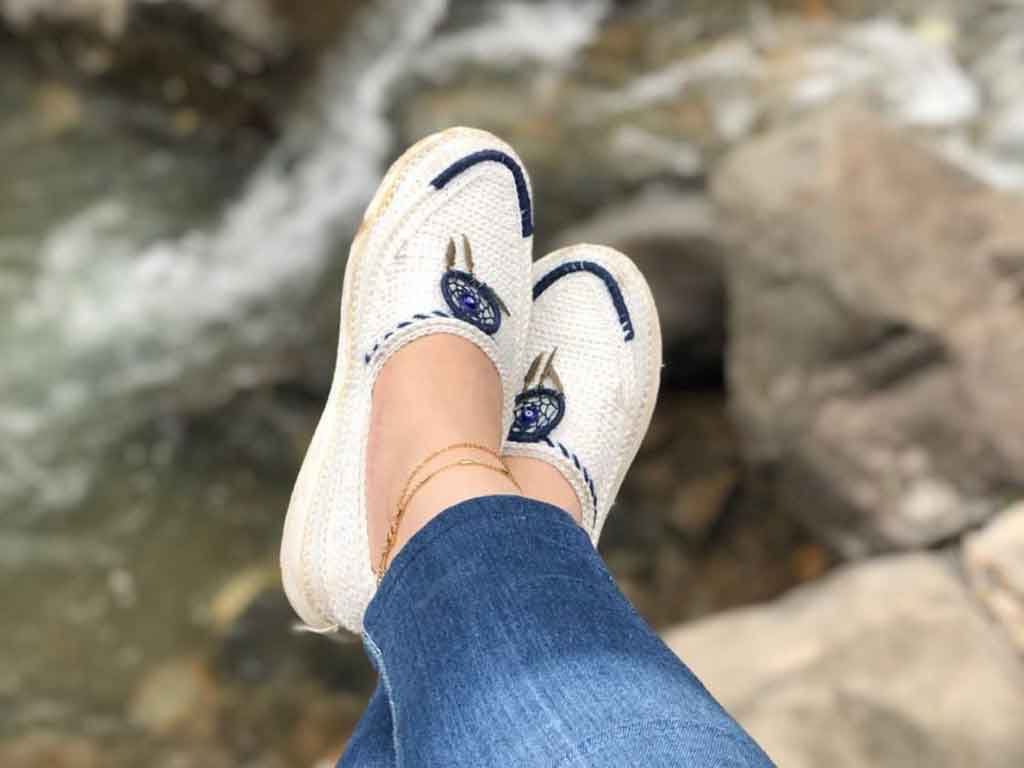 Givehs vary based on the thread and material used for the Ruyeh/Zireh, the way these two pieces are tied together and the region of production:

The name of this Giveh goes after its Zireh which is skillfully made of cotton and leather and is called Maleki sole or Kohnei sole: Cotton warps (the warp might either be of canvas) and leather wefts are tightly woven together resulting in a sturdy piece which is then cut into size and attached to Ruyeh.

Among the different types of Giveh in Iran, Maleki is expensive. Its finely-knit Ruyeh is smooth and soft. It has more room for the toe in the front. Then, for the same foot size Maleki looks longer.

“Shahr” means city and this Giveh is called Shahri because it’s popular in urban areas. Leather is used to make the Zireh of a City Giveh.

“Latte” is an old Persian word meaning aged cloth. This cloth makes the Zireh of this type of Giveh and that is the reason of its name.

Generally, using rubber in Zireh makes the product cheaper. Its Ruyeh is coarsely woven and this also helps make this type inexpensive and quite simple.

Woven colorful silk threads make an eye-catching appearance for this footwear. Thanks to its stunning beauty, it’s sometimes used as a decorative object.

The inhabitants of Kurdish regions make a unique Giveh whose Royeh and Zireh are made of fine cotton threads and condensed cloth, respectively. Interestingly, Klash does not have left or right and it is traditionally just white. It’s light and cool, hence prevents odorous feet. Before using Klash, you should rub it on the grass to have all its holes filled; this way your Klash would become waterproof.

Its flexibility, durability and reliability has made Klash popular and practical in mountainous areas like Uraman, Hajij, Nodeshe and even Kurdish regions of Iraq.

Blue, white, red, and black are the prevalent colors in making Giveh. Traditionally, men’s Giveh was only white while the women’s was in different colors with ornamental beads. Opposite to Giveh, Klash is only plain white. Ironically, Klash which is almost made by women, is a men’s footwear and has no version for women.