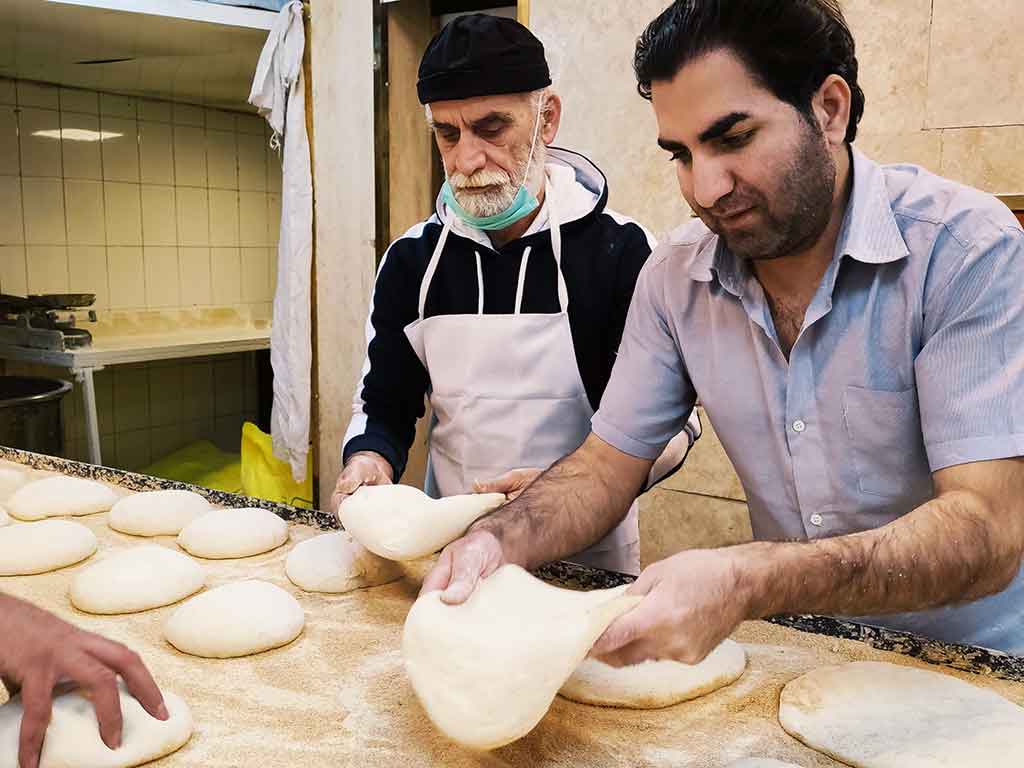 “Have you had bread?”

The equivalent of such question in Persian language, in many cities of Iran, means: “Have you had food/lunch/dinner?”. Using the word “bread” instead of a whole meal is not accidental. It clearly shows the great role bread once had, and still in some regions has, as a staple in Iranian diet.

As an indispensable — and sometimes the only — member of the dining table, bread was highly respected in Iranian culture. Dinners, lunches and breakfasts mainly consisted a few things with bread as the main food and some flavoring additions: like aromatic vegetables, cheese, butter, jam and meat. Iranians still wrap various ingredients inside a thin layer of bread and make a sandwich to bite or make morsels with the help of a small piece of bread, in mouthful size.

From my childhood I remember, people would never throw away or leave the remained bread on the ground as it was showing ingratitude to God. Fresh bread was suitable to wrap things inside while dried one used to sop into watery foods. Amazingly, some Iranian foods seem to be cooked in a way to be eaten with the bread that would unless be wasted! Abgoosht, one of the most traditional Iranian foods, is the best example; People separate the solid ingredients of Abgoosht from the watery part, break dried bread and soak them into the food’s water. 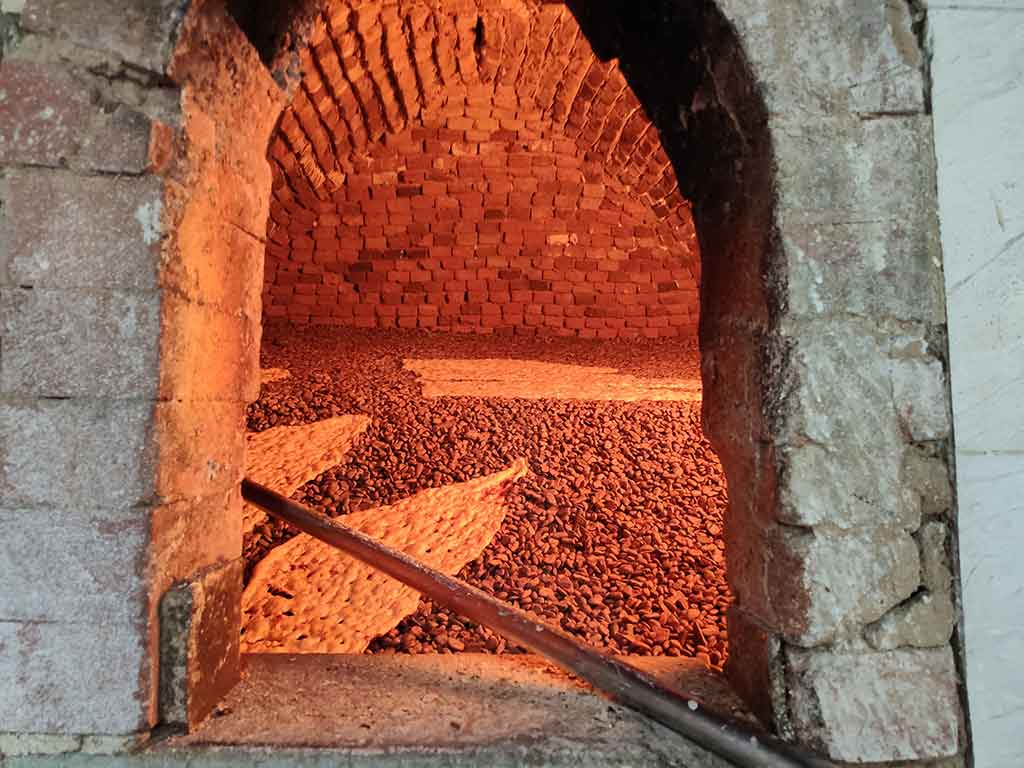 Sangak bread oven with a flat surface covered with pebbles; the oven is, traditionally similar to the bread shape, triangular in the case of Sangak.

Various tribes with different customs, languages (or dialects), lifestyles, and environments live in Iran. This diversity seems to be the main reason behind so many different breads cooked in the country. It not only affects the cooking styles, but also the ingredients used to make the dough.

Where a specific crop is abundant, people improvise methods to make the maximum use out of the available resources. The Bakhtiari nomads, for instance, had an easy access to chestnut fruit, with Zagros Mountains as a reliable source of oak trees. During their seasonal migrations, the nomads could not make fire everywhere or bake breads every day. In addition, the laborious task of migration would require high energy. It all led to the use of chestnut as the main ingredient in making the bread dough. The chestnut-baked bread was heavy and dense, suitable to keep the nomads’ stomachs full for a while.

The most delicate and delicious breads was made of wheat flour. The poor, who could not afford the wheat bread used to have barley and even millet breads. Willem Floor, the author of “History of Bread in Iran”, writes in his book that when Alexander the Great’s navy arrived to Makran coasts in the south east of Iran, they found the indigenous people cooking breads with a mixture of wheat/barley flour and powdered dried fish. It is another brilliant example of the Iranians flexibility in using what they have in hand.

Depending on their culture, climate and needs, people baked bread once in several days or on a daily basis. The sizzling summer heat force some villagers to bake bread once a week/fortnight and store it for the days to come. However, between Lurs — Lurish people are one of the oldest Iranian tribes — the bread should be fresh and prepared each day. The women of Baloch and Turkmens bake twice a day; once in the morning and once in the afternoon. Famine, in the old days, was a ceaseless threat for which the people would store bread.

Thanks to high demands and machinery advances, the process of baking traditional breads in Iran is industrialized. Yet, some bakeries have kept customs alive, using the same traditional methods and ovens used in the past. “Tanoor”, the Persian oven, varies depending on the breads baked in it.

Traditional tanoors’ surface, where the baker sticks the dough, is usually of clay. Fire burns in the bottom and the half-sphere or cylindrical shape of the oven helps spread the heat uniformly over the inner walls. Decades ago, kitchens had to have oven built in. In today’s modern lifestyle, though, there is no room for such activity in apartments and everyone buys their breads from bakeries.

In front of the bakeries people line in two queues: one for the people who want one loaf and the other for those who need two or more. The queues might stretch to a few meters. 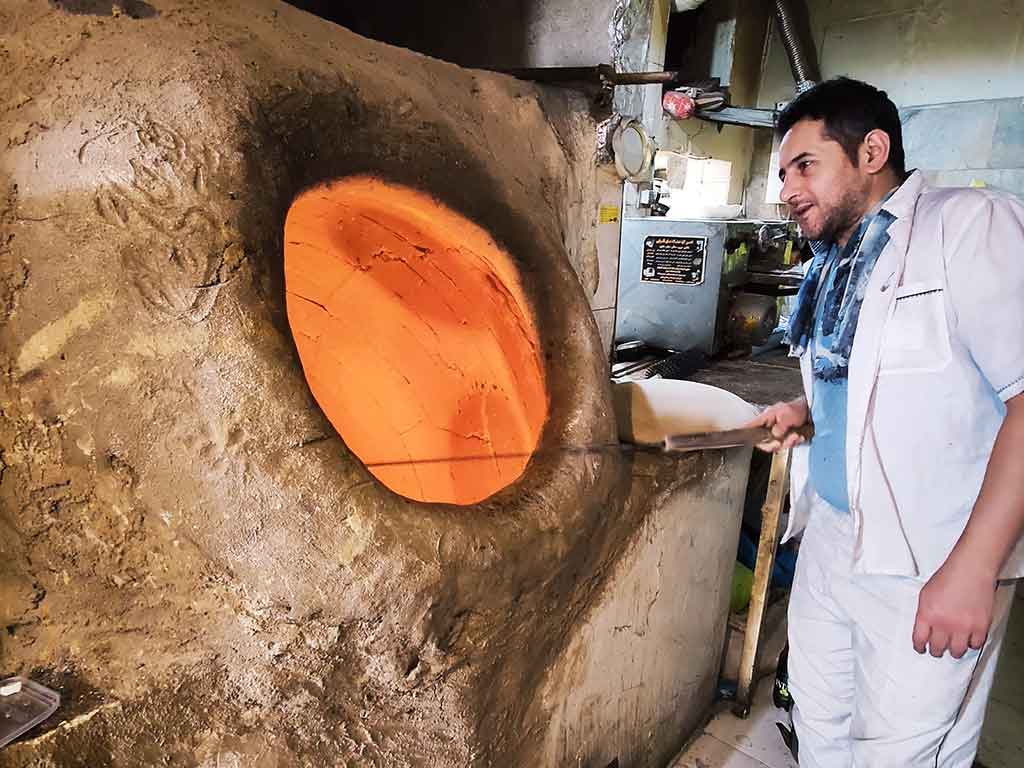 The oven of Taftoon is spherical. Heat source is beneath; traditionally, it was wood and charcoal which are replaced by gas.

Is baked on gravels — “Sang” in Persian — and that is the reason behind the naming. It roots back to pre-Islam time in Iran. Physicians believed in the medical values of Sangak, prescribing it for the patient. Some sources claim that “Sheikh Baha’i”, the Iranian scholar of Safavid era, made Sangak for the first time. Sangak goes very well with traditional dishes like Abgoosht.

Nomads called Barbar baked this bread. Without any solid proof, some say that it originated from Tabriz. The oven in which Barbari is baked, has a flat surface. Today, Barbari is also a popular bread, specifically for breakfast. Unlike Sangak, Barbari is only good when it is fresh and hot. 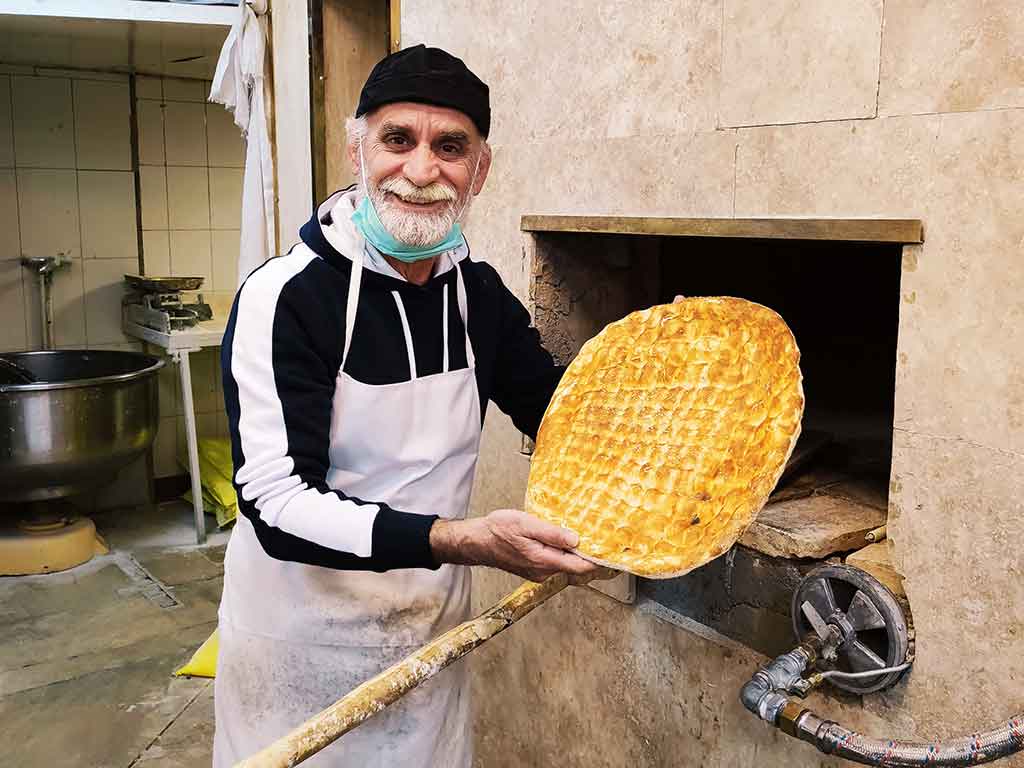 Barbari is traditionally long and elliptical. Today, many bakeries make it circular for the ease of baking and keeping. The man in the photo is my dad (Mehdi) and this bread is the first bread he baked in his life.

Villagers were the main consumers of this thin bread. Little by little it found its way through urbans’ diet. Taftoon is baked in a cylindrical or spherical oven and the baker sticks the dough into the oven’s inner wall.

Originated in Armenia. Owing to cultural, financial and historical communications between Iranians and Armenians, this bread firmed its position in Persian diet. Contrary to the previously explained breads, Lavash has the least nutritional value, as it is solely made of white flour. Every now and then, it is used as stuck-pot.