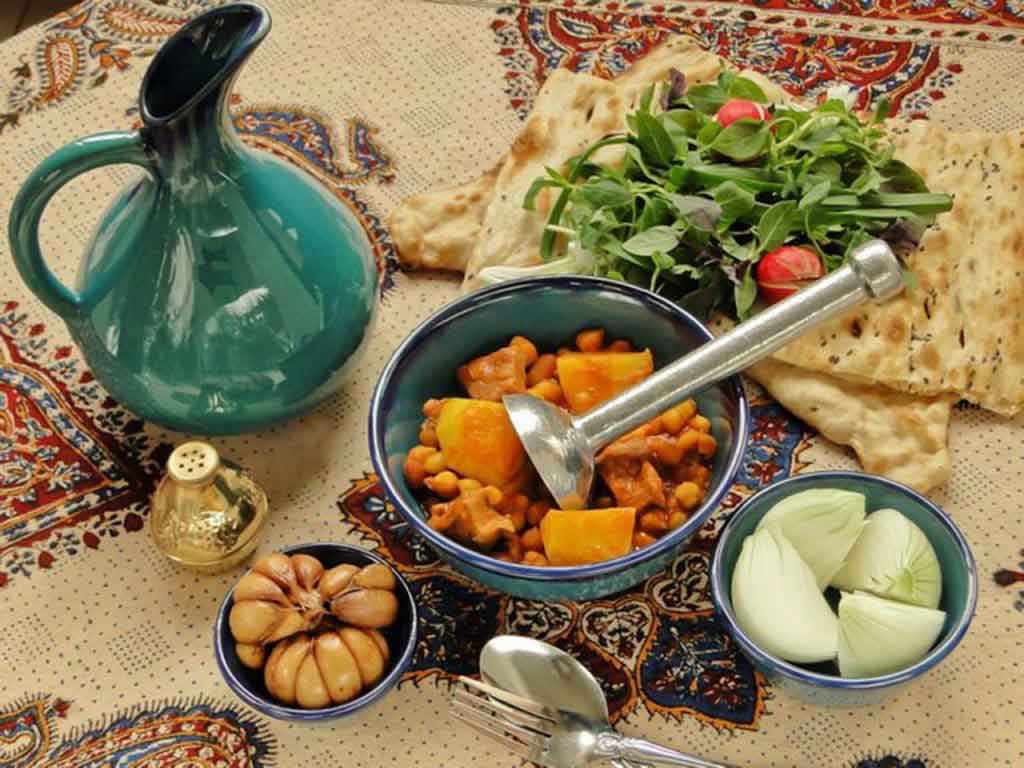 Abgoosht, Dizi, is definitely among the most popular Iranian foods. Although there’s no consensus over its origination, people of Tehran claim the food belongs to the capital and bring some evidences — stories passed through generations, words and phrases introduced to our language and specialized restaurants serving only Abgoosht — showing the great role that Abgoosht has had in shaping the city’s food culture.

The main ingredients of the recipe are simple, inexpensive and ubiquitous: water (Ab) and lamb (Goosht), clearly showing the reason behind the food’s name. Chickpeas, tomato, potato, beans, onion, garlic, dried lime, turmeric, pepper and salt are the other materials to cook the dish — in different cities, people add various vegetables that results in different tastes, colors and textures.

Not only the food, but also the way it’s eaten is special: its liquid is separated from the solid ingredients, bread is sopped into it and eaten with some pickles like onion and vinegar-soured vegetables. The solid materials are then mashed together yielding a mushy mix which is wrapped in bread and eaten in morsels. Long time ago, the food could be only cooked in big pots suitable for two, four, six or eight diners. Meaning that having no companion, one should have ordered an amount of food they couldn’t finish. Thus strangers would join together for a meal and restauranteurs used to advertise outside the restaurant shouting to encourage hungry customers willing to have a meal shared with other passersby.

The food also affected the spoken language in streets, introducing new words: “Payeh” is an instance which means “leg”. As the food was shared between different customers, the restauranteurs would call each customer a “leg” of the group. So “are-you-a-leg” became a popular phrase to ask if someone is willing to have an Abgoosht shared. Nowadays, people have expanded the use of the phrase to ask willingness of a person to cooperate in an activity.

Another phrase introduced by the food is “Moft-khori” that means eating without paying the price. And how it could be?! Remember that Dizi was cooked in large volumes for more than one customers. Then it used to happen a lot when a restauranteur didn’t have enough customer for the shared food. In such cases, an employee of the restaurant would stand outside and shout to invite new customers trying to make the necessary number for the shared food. Diners who were the first in the group had to wait until others join them. Waiting for a long time could irritate any customer. So, the restauranteurs had a trick to keep them happily waiting: making a special morsel of Abgoosht for FREE! Some bullies got used to abuse the situation going from a restaurant to another only having the “free morsel” and coming out. This socially unacceptable behavior initiated the derogatory term “Moft-khori”.

Interestingly, I did not really know this

Happy to see you liked it :)